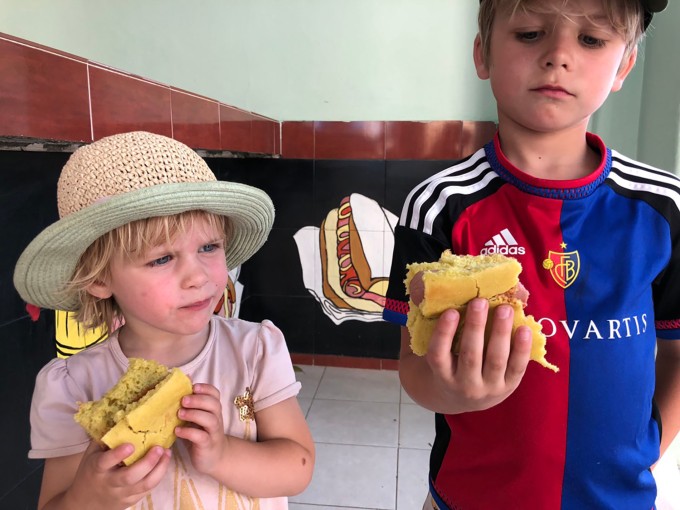 As an adult, you can get tired of the same diet for 3 weeks – kids they simply refuse to eat. And then they go around complaining about being hungry all the time while you tear your hair trying to explain why they can´t get French fries today either.

Remembering the Cuban diet is combined with a certain bittersweet feeling. Yes, their food availability is limited but no, that´s not the same as saying that their food is bad. I didn´t expect very much food wise before coming to Cuba ´cause I knew that they had limited resources to work with. For the sake of the kids I was a bit worried since small children comes with a certain picky stubbornness directly related to food. And in the same time, they are moody as heck. One day they simply “Loooooove” something. But when you the other day serve them the same thing with a smile, remembering the hit from last night, you can be sure that their taste suddenly changed drastically during the night. “Uuääääääh” they scream in a very loud voice whilst they at the same time (totally unembarrassed) spit the food out on the table in front of the other restaurant guests.

The good thing about being in a place where there aren’t any choices regarding food is that you don´t need to worry if the kids will eat or not. Because they won´t. It took our kids at least one and a half week ´til it finally hit them that it didn´t matter how many times they screamed for burgers or välling (Swedish drink that all the kids love to drink from a bottle in the morning or evening) or fries or Swedish yoghurt or something else they were used to get from home. They just weren’t gonna get it. I remember my concern the first days when all Olivia wanted to eat was the cashew nuts that we brought with us from home. And then she got a bad stomach, probably from having a diet that contained of cashews, cashews and cashews, some rice, a piece of cucumber and water.

But some when during the second week Eddie suddenly started to eat his omelette in the morning. On one condition. He wanted to put sugar on it – a lot of sugar. Our hosts in our casas was looking at him with dread in their eyes. But I was happy, because our son was getting protein in the morning.

The Cuban food is very fresh and mainly contains of fish, rice, beans in a sauce (that you are supposed to mix with the rice), a salad made of cabbage, tomatoes and cucumber and some banana chips on the side. You can often vary the protein source between lobster, fish, chicken and pork. But that´s it. The more touristy spots also tend to have pasta, pizza, fries and burgers but most places can´t offer these things. The most common alcohol drink you see is beer or mojito. The Cubans put rhum in almost everything.

However, what I discovered in my role as a concerned mother was that it was a very good experience for my kids going through the pain of having to face the same breakfast, lunch and dinner over and over again. And even if they barely ate meals and mostly lived of bread and crackers for a few days it didn´t harm them. In the end, they finally gave in and started to find their way through the Cuban diet. Kids aren´t stupid. If they see a way out that will lead them to getting what they want they take it. But when they are forced to try something else they will learn to like it. Or at least accept it.

Still, what a joy when we walked into an American supermarket for the first time. Finding 20 alternatives (at least) offering the same thing in a different way. Yesterday I found myself staring at a shelve with a load of different kind of butter spreads that all where “tasting exactly like butter without being butter” (which means it most probably tastes like anything BUT butter) stressing over what was the best alternative of all these strange options.

Oh, the perks of having to choose. Thank god for Cuban food.

At pitoresque café Arcangel in Havana

A drawing book and crayons saved many restaurant nights

Rice and chicken – one of Cubas national meals 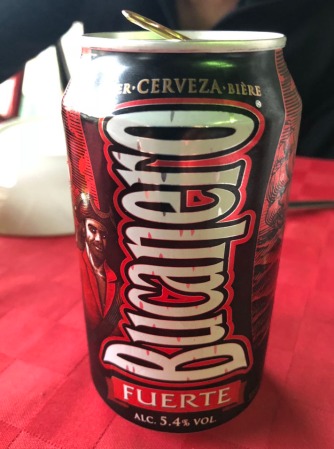 Cuban beer at it´s best (according to Katrine) 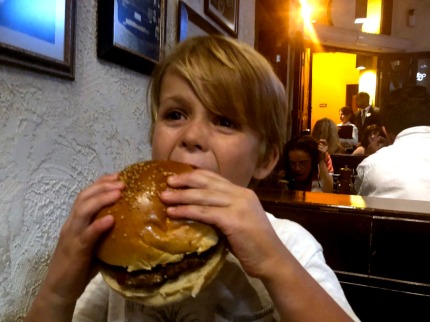 After 10 days in Cuba we found burgers. And what a burger (size) it was!

Mushroom crepes – one of the more delicate starters we had

La Guarida – even the toilets were a sight for sore eyes 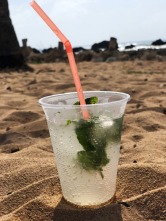 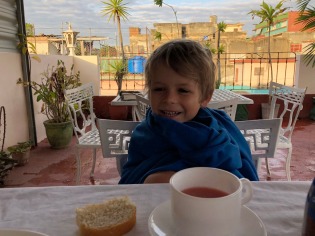 Breakfast on the roof terrasse… 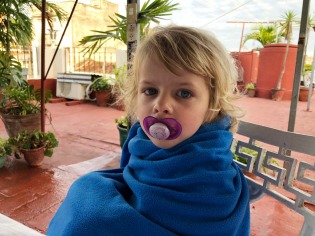 ….haven´t quite woken up yet 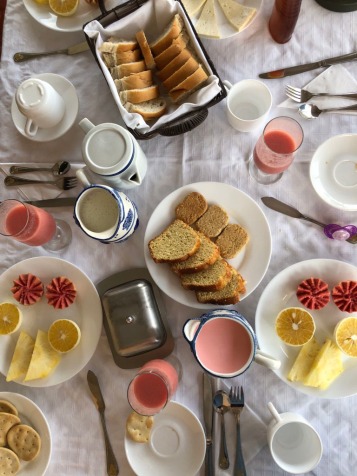 Outside a restaurant in old Havana 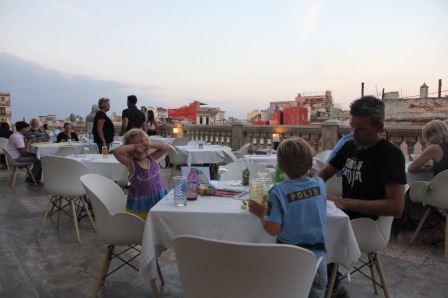 Dinner at La Guardia – probably the most beautiful restaurant in Havana

Ps. For those who are interested I´ve now put up a very simple page with our traveling route. Check it out to see where we´re at right now.