High life in New Orleans and low moods in the middle of Mississippi. The blues will get you at some point. And the best way to engage is to lean back and say “Lem-me put mah feet up – Aah’m taard.”

The American South has always fascinated me. I think it is this mix between the extremely slow and funny dialect (sometimes it almost feels like the people here are falling asleep talking) the beautiful scenery, the music and all the history that has been made down here. Everything has a very laid back and authentic feeling over itself. Even though the world is spinning faster and faster there are sounds and places that just stays the same, where you are allowed to think slow thoughts and have dull days.

We spend two days in the town of Natchez by the Mississippi River. This is a very beautiful but yet a somehow sleepy place with pompous old houses. Everyone we meet is talking about the rich historical heritage this region carries. Natchez is one of the oldest cities in the Mississippi Valley, founded by the French in 1710. When I walk around looking at these architectural masterpieces I can´t help thinking about the conditions which so many black people were serving under up until the middle of the 19th century. To me it´s impossible to imagine that some people could own others, and yet historically it is not so far away.

During our second day in Natchez a real thunder storm is breaking out and the rain drops are hitting the windows like little bullets. This day is the first day in our entire trip where it´s been less nice of a weather. And it´s actually quite nice. We´re all having somewhat of an off-day wandering around the city center with no plans and pending moods. Olivia has the way of always walking in the opposite direction as the rest of us and I have to run after her with heavy steps trying not to get upset (´cause then it only gets worse). After making a retreat to the house again in the afternoon we capitulate in front of the kid´s section of Netflix. After 30 minutes of complete silence and intense watching Olivia moves herself and her pillow from the armchair to the floor and fall asleep. 4 hours later she is still sleeping. And this is our day in the metropole of Natchez. 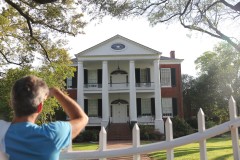 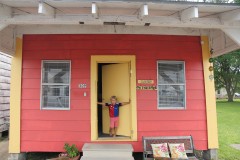 Cutesy on the river is our little house in Natchez

Laid back living room of our airbnb

Nola has space for you

Two days earlier we are discovering one of the pearls of the American South, New Orleans or Nola as the locals call it. We stay at this great Austrian guy´s place. He´s name is Christian and the kids love him. Every minute they ask if they can go knock on his door and play with him. He has tons of lego and a small music studio in his garage. He and his two kids are having a family band he explains.

New Orleans is so much a city in my taste. The food is of course delicious and you would need at least a whole week to try through all the different specials. On Frenchman and Royal Street you can use hours just wandering through the different galleries and small shops with their own original look. Magazine Street is another fabulous venue a bit away from the city center. But the Nola spirit really lies in the melting pot of all the different people living here. Like one of the locals tells us “In New Orleans there is space for you, regardless of who you are and where you come from”. In the end people unite in a collective will of expressing themselves creatively in different ways. We also get seduced by Nolas charm, and so far this is one of the highlights of our US trip. 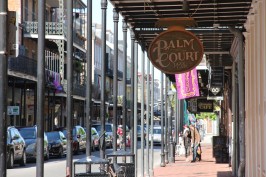 Olivia trying out glasses at the French market – how are these looking? 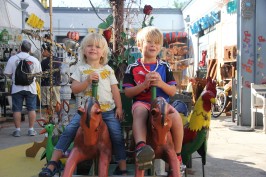 An antique market on Frenchman Street.

There is a house in New Orleans…

I hope they are not hungover very often…

Writing this I´m sitting in a motel in west Memphis. We left an unusually cold Natchez around 11.30 am and reached an almost freezing Memphis around 6 pm. On the way we made a pitstop in a litte suburb to Jackson called Gluckstadt (founded by the Germans some hundred years ago). Our lucky shot. Her we find a combined bikeshop/café with great panini and friendly people. We share our passion for nature and biking over a cup of coffee before we move further. Should you ever end up somewhere outside Jackson on interstate highway 55 Bicycle Revolution will serve you right.

We reach Memphis with very mixed expectations. People we´ve talked to on the way has been giving us completely different reviews of the city, but we nevertheless decide to try it out for one night. We drive directly downtown to the music and food quarters of Beale street and stumble out of the car with stiff sitting-in-the-car-all-day bodies. It is freezing outside, not more than 5 degrees Celsius and we are still walking around in our casual summer wardrobe. Music, blinking signs and Elvis souvenirs in all the colors and shapes you can think of everywhere you look. 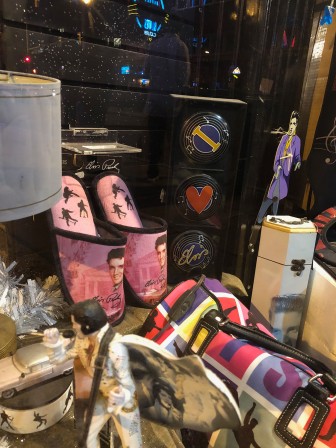 This is Memphis for sure, and you can´t help to get a little bit carried away with the back to the 50-60s charm. We get recommended the best barbecue place in the city and head for the Blues City Café. Man, is this a fantastic venue. Walking through the doors it feels like this place hasn´t changed since the days of Elvis Presley. You can easily imagine all the stars sitting eating their ribs in the casual restaurant setting while drinking beer from plastic cups. Our last pit stop for the day we make in the live music venue of Alfred´s, listening to a blues band that look like they´ve arrived directly from the past (except for their grey hair). They tell stories of Johnny Cash like they´ve known him in person and sing “Walk the line” like they´ve done it a hundred times before.

I would definitely take a dirt road for this place

Original blues band from the 60s

And like I´ve done a thousand times before I will now put my tired body in my motel bed and say “Sweet dreams y´all, see ya in da mornin”.