Getting to know a country can be very romantic. At least in the beginning. You see all the beautiful sides and don´t pay attention to the flaws. Your eyes are wide open and you just want to learn everything about your new friend. This is me 10 years ago – and the object of my crush was Switzerland.

During four theme articles I will let you in on my 10 year long journey together with a fascinating little country in the heart of Europe. A journey that have taught me more about myself and my own culture than I could ever dream of. This blog series will take you through the pros and cons in falling in love with a person from another country. And it will touch subjects about Switzerland that goes beyond a normal tourist portrait of a country. Hope you´ll enjoy it.

How do you define a home?

I always had scattered roots. One of the reasons is probably my cultural background. I was born in Denmark and raised in Sweden. Two countries that on the surface seems so alike but are more different than you might think. Home was always in Sweden, but a big chunk of my heart still belonged to the neighbor in the west. The division between two cultures always made me quite open to new things, different perspectives and I pictured myself living in many different parts of the world. Maybe it is not a coincidence that I am now together with a Swiss guy. Eleven years ago (before having ever met me) the love of my life went to Sweden to work with IKEA and live in exile in the forest. Here he was tucked away in a red wooden house just like in an Astrid Lindgren saga. He thought he´d try out the Swedish life for a year or two. Thanks to me he´s been stuck here for ten years now.

To me a home is not one specific place. It is a feeling. A feeling of being able to be exactly yourself, without putting on a face, a mask or whatever you´d like to call it. You are you without any second thoughts. To me, my family is my most important home. They are my foundation, my steady rock. However our home location may change from time to time. Or we might feel at home in many different places. One of the spots that I´ve come to call my home during these past ten years is Switzerland. A place that has surprised me more than once, made me overwhelmed by joy, pissed me off to the extent that I would like to scream to it´s face and that has, most importantly, taught me to look at my own Scandinavian culture with a brand new perspective.

We are sitting in a car on the highway between Bern and Basel in Switzerland. Rain is pouring down the windshield and even though it´s in the middle of winter it feels more like a grey autumn day. It is my first visit to Switzerland together with my Swiss guy Thomas (after having dated for only two months) and we´ve just visited the Swiss capital Bern for the first time. It is a beautiful city with lots of old buildings and a very laid back atmosphere, even though it is the political headquarters of Switzerland. Through the city runs river Aare and in the background the contours of the Alps are giving extra pondus to the old architecture. I feel a bit seduced. I fantasize about us living here and wonder what I would do for a living here. Maybe work for the Swedish embassy or be an international journalist. My head is spinning with thrilling ideas. Like so many times before when I´ve found a new place to fall in love with.

– So, could you imagine to live here? Thomas asks me with a playful grin on his face. Like he knows what I´m thinking.
– In Bern you mean? Yeah, maybe. Why not. I try not to reveal my excitement too much.

There are many places on earth I could imagine to live. That I could picture as my home. But I also know that the first romance usually never lasts. As the relationship grows it turns in to frustration, comparison with what you know from your past, and in the end, if you are lucky, acceptance and profound love as you really get to know the place and yourself. Or divorce if you end up feeling that the differences in cultures are to big to overcome.

Before I met Thomas I never thought of going to Switzerland. The country had no real attraction on me. I knew that it was beautiful and rich and that many famous people settled down there to be able to nurture their fortune and take part of the high living standards that the country was offering it´s citizens. I´d heard of the Swiss perfectionism and it kind of scared me. Maybe because I´m, in many ways, an incorrigible perfectionist myself.

Hello to a friendly nation

Little did I know how interesting this country actually was to me. Switzerland is blooming with culture and linguistic diversity, social and individual accountability and genuine friendliness of the people. The Swedes are quite known around the world for being neat and friendly people. But when I had my first encounter with the Swiss society it was clear to me that in comparison Swedish people are quite reserved and initially not as open to strangers as we might think ourselves. What struck me getting to know the Swiss mentality was how easy it was to talk to people and how many questions I always got from the people I spoke to.

The initial impression I got from the Swiss people I met were that they are generally eager to be polite, shake hands with everyone they don´t know and introduce themselves in a proper maner. Little things that make life so much easier for you when you are a newbie. In a party everyone came up to me. I hardly ever was left alone in a corner. Whereas if I was in the same situation in Sweden people would most probably expect me to introduce myself to them.

In Switzerland you always greet each other when you see someone in the streets. It doesn´t matter if you walk in the village that you live in or on a mountain peek. When you pass someone you always say hello. And this hello sounds different depending on where you are. In Basel (where Thomas come from) you say Grüezi, around Bern you say Grüessech. Some people also say Grüezi Miteinand (which really confused me at first) until Thomas told me that it means Hello you and is said when you meet two or a group of people. In the French part of the country you use Bonjour or Salut. In Italian speaking Ticino you say Ciao and when someone speaks Romansh they say Allegra or Tgau. And these are just the most common words to greet each other. There are also more informal ways to say hello, like Hoi, Sali or Hoi zämme (Hallo zusammen). No wonder Swiss people are so nice when they have a whole vocabulary for only one word.

Don´t get in despair now. Every Swiss also understands hello.

So much culture on so little surface

During my first romantic years with Switzerland my eyes opened to what a cultural melting pot this country actually is. Switzerlands modest size of 41,285 km2 or 15,940 miles (in comparison 10 percent of Swedens size or half a percent of the US) is divided into no less than 26 federal states (cantons) and four different culture regions (German, French, Italian and Romansh). Everywhere you go you hear different languages and even the German language is here divided into several different Swiss German dialects. Some of which are harder to understand than others.

Being a northern girl I am used to distances. And the feeling of disconnection from the rest of the world. For me the encounter with Switzerland felt like I was getting the cake and got to eat it at the same time. One morning I could wake up in the German speaking Alps, two hours later I could be strolling the streets of Lausanne with a croissant and a café au lait in my hand. It takes not more than a couple of hours from the northern part of Switzerland to the Italian speaking part Ticino. Ticino is as close as you can get to Italy without actually being there.

On my first visit to Switzerland Thomas took me up on a hill in Basel and presented to me the reality that the Swiss people face every day. Being centered like a little marzipan rose in the middle of the yummy layer cake of Europe. For this tucked away naive Scandinavian soul it was close to wow when I heard Thomas say:

– Look to the left. There, just over the hills you have France. And when you turn your head 90° in that direction you are looking directly at the German border.

Speaking of borders. This will be the theme for the next episode of my Switzerland journey. Borders within yourself when it comes to language, borders in form of culture differences and alienation when you feel like you are the only one in a room that aren´t part of the group. Don´t miss out.

A beautiful dayhike is the one to Faulhorn, Berner Oberland, 2681 m.

The fountain in front of the Swiss parliament in Bern is a popular playground. 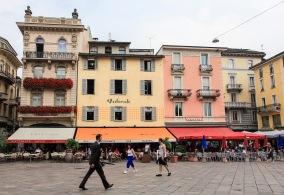 To boys playing soccer in a village in Ticino 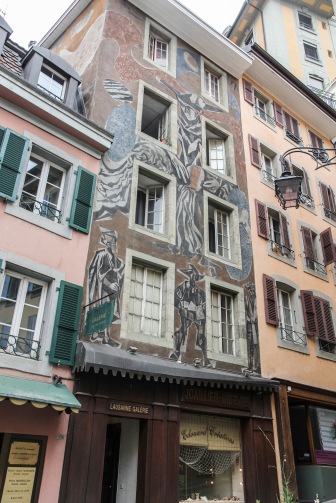 What is up and what is down? Metro in Lausanne