There´s this thing about being new to a place. Bike down a street for the first time. Go for an early morning run and discover your neighborhood. Send your son to a new school, with a brand new backpack. It´s this feeling of anticipation and insecurity all at once. And in the haze of all this you tiptoe yourself around not to destroy the delicate feeling of freshness and undiscovered opportunities.

It´s ten to eight in the morning and I close the door behind me and Eddie as I get ready to take him to school. Behind us we hear loud steps coming down the stairs from the apartment on the second floor. It´s Dennis, the neighbor son, that is rushing away to Kindergarten with his backpack bouncing around on his back like a flipper ball. He throws himself out the door, shout to his friends on the court yard who waits for him to catch up, and then they all disappear into the building next door.

Shy at home – adaptive to the world

Eddie and I walk the few hundred metres to his school and I say goodbye to him before he walks through the two big entrance doors. He is suddenly so big. This boy who didn´t want me to leave him at school back home in Sweden, who begged for us to let him stay at home, who never wanted to go home to friends alone. After three weeks in Basel he has already grown an inch or two inside. He is now a first grader, who walks home alone with his buddies, stay out and play until I have to drag him in to dinner and so naturally takes on all the new stuff that comes with moving to a different country and start a new life.

“In school they speak a weird language called High German, he tells his friend Jonathan back in Sweden when they are meeting on Face time one night. I don´t understand anything he says and laughs.”

It´s funny how kids that can be rather insecure and inhibited in their home environment suddenly bloom like a sun flower when they are thrown into a new surrounding. I wonder how this can be? There´s probably a good scientific explanation to it. It´s anyway a big relief that our son has taken all the changes exceptionally well.

My own initial reaction to my sons start in school here has been much more adult and reserved. I have measured the Swiss school system against the Swedish one which of course I can´t help to glorify a bit (even though I´ve sometimes had my hesitations about it back home). Typical control behavior, huh? That´s why we grown ups actually have a much harder time to cope with change than our kids. We are so bound to our perception of the world that we have a hard time to reprogram ourselves.

Digital this and that

However right or wrong it might be, during my first encounter with a Swiss school I felt like Marty McFly going back to his dads high school years in the movie Back to the Future. But instead I was flying back to my own childhood. Everywhere I looked I saw signs of tradition and history. An over head machine in every corner and sharpened pencils in the pupils benches. No computers anywhere. I found myself asking the principal, in a voice that was just slightly too eager, how they were using digital devices in schools. Adding that I thought that it was veeeery important that the kids were keeping up with the digital development. I thought I could sense in her eyes that she was putting me in the difficult parent category. But in fact, she was probably just paying attention to my question thinking how she could answer me in the best way. Self centered is a word that fall on my lips. Too self centered to let myself go and just have faith in this new situation.

In fact. It doesn’t matter if Eddies new school is more or less digital than his school back in Sweden. It doesn’t matter if I think they have a lot of weird rules, like that the pupils have to take home their pencils every Friday and sharpen them over the weekend or that they can´t take the bikes to school before they are in fourth grade. It doesn’t matter at all what I think actually. Because my son is happy right now and the teachers and his classmates have done such a wonderful job in making him feel welcomed. As parents we are sometimes so busy trying to secure the absolute best for our kids that we forget that all our kids want is to feel part of a community. To be appreciated and seen. 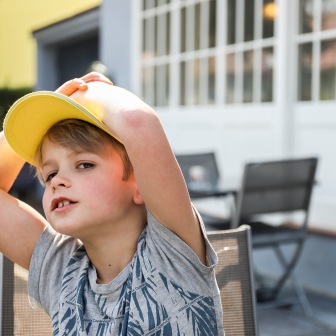 Telling grandma about his first day at school

So I leave the school with a light head. I go home to my computer or take the bike to a café in the city and I start sketching out my life in this new environment. I make plans, carve strategies and think a lot. In between I swear a bit when my Scandinavian soul is being challenged with things that I am not used to. Like having to use the formal Sie whenever I meet new people, calling people by their last names, having to buy special garbage bags for my rubbish and that sort of earthly things. But then I calm myself down by the thought that I at least don´t have to rewrite my past, like Marty McFly. All I have to bother about is my future.

Going to Basel has been good for me. I´ve suddenly realized how much I missed the pulse and the variation of people, languages and cultures. We´ve left a lovely house by the ocean and in the middle of nature, behind us. And all I can feel right now is relief. Relief of being in a smaller apartment, not having so much to take care of and clean. To be able to take the tram or bike to a restaurant, a park, a café or a new adventure not far from my home. I can step on a train to Paris in the morning and be there at lunchtime, I can go shopping in Germany during the day, go to Ticino and listen to Italian over the weekend and in the winter I can put on my skis and go for a weekend in the Alps whenever I feel like it. This feeling of being in the middle of everything is something I´ve always longed for, and now I get to try it out, together with my loved ones. It´s actually funny that a person like me, who have grown up in a house in a small community, always have longed for the city pulse so much.

Basel is a fascinating city. Big, yet small. Global, yet local. It´s Switzerlands second biggest economical centre after Zürich and the headquarter for chemical and pharmaceutical industries. Basel also hold an impressive amount of international museums and the city take pride in it´s cultural image. We live in a block called The Bachletten – that I already have come to love after only being her for a few weeks. It has this comfortable urban, yet chilled, style that a a typical living area just outside the city centre has. Life in every corner, yet space enough for me to breathe and listen to birds singing.

Who are we to judge?

The other day Thomas and I located a new favorite café just around the corner from where we live. Smilla, it´s called, and everything about this place breathes Scandinavian style. Danish furniture and bright colors. On top of it all we stumble upon a Swedish-Swiss couple sitting at the table next to us. She is a former journalist from Sweden and he is a Swiss salesman. They moved from Gothenburg to Basel 50 years ago and we end up spending the next two hours talking to them – about essential things like life, work, culture differences and politics. It´s funny how you are inevitably always pulled back to your roots wherever you are. We look for places where we can find similar minded, with the same background as us – and the same perception of the world. We want change, fresh air – yet we urge for something familiar.

This brings me to think of one of our topics of discussion at our coffee table there in Smilla café. A political topic that has to do with immigrants right to practice their own culture in a foreign country. It´s easy to frown at them who (in our eyes) refuse to practice our rules and embrace our culture. But look at it the other way around? How do we react ourselves when we are abroad? We cling to what´s familiar to us. How small and insignificant it might be in other peoples eyes we cling to it. ´Cause, without our own culture who are we? This is a natural human instinct to protect our selves and our view of the world from outer danger. And we are all carriers of this defense mechanism.

In the end we are all the same. The only thing that separates us from each other is our perception of the world.

Following pictures are taken in and around our new neighborhood: 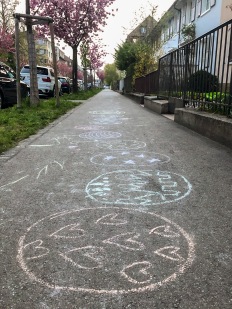 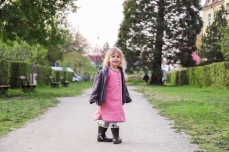 These vines are fantastic!

Parallell street to ours

Friday evening fun in the neighborhood

Typical architecture in our block 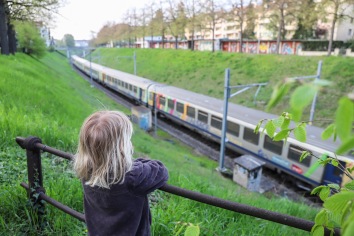 Waiting for the train to France

Two little monkeys in our back yard

What are you thinking of?

First beer at the balcony